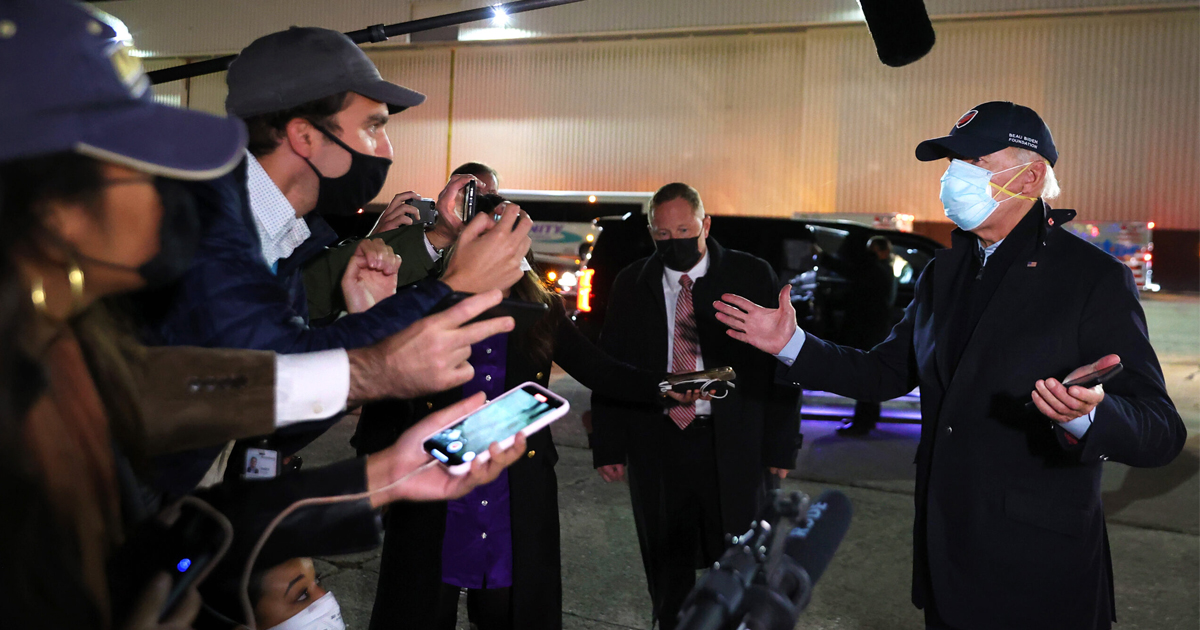 Democrat presidential nominee Joe Biden snapped at a CBS News reporter late on Friday night for asking about the bombshell reports published this week in the New York Post about the business dealings of his son, Hunter Biden, and Joe Biden’s actions as vice president.

When asked by Bo Erickson what his response was to the reports, Joe Biden said, “I have no response.”

Biden lashed out at the reporter, saying, “I know you’d ask it” and that it was a “smear campaign” that was “right up” the reporter’s “alley,” adding, “those are the questions you always ask.”

I asked Joe Biden: What is your response to the NYPost story about your son, sir?

He called it a “smear campaign” and then went after me. “I know you’d ask it. I have no response, it’s another smear campaign, right up your alley, those are the questions you always ask.” pic.twitter.com/Eo6VD4TqxD

The New York Post reported that emails obtained on a laptop appeared to show that Joe Biden met an executive at Burisma, a Ukrainian gas company where Hunter Biden served on the board.

“The never-before-revealed meeting is mentioned in a message of appreciation that Vadym Pozharskyi, an adviser to the board of Burisma, allegedly sent Hunter Biden on April 17, 2015, about a year after Hunter joined the Burisma board at a reported salary of up to $50,000 a month,” The New York Post reported. “‘Dear Hunter, thank you for inviting me to DC and giving an opportunity to meet your father and spent [sic] some time together. It’s realty [sic] an honor and pleasure,’ the e-mail reads. An earlier e-mail from May 2014 also shows Pozharskyi, reportedly Burisma’s No. 3 exec, asking Hunter for ‘advice on how you could use your influence’ on the company’s behalf.”

Fox News noted that the emails appeared “to outline a payout for former Vice President Joe Biden as part of a deal with a Chinese energy firm.”

“One email, dated May 13, 2017, and obtained by Fox News, includes a discussion of ‘remuneration packages’ for six people in a business deal with a Chinese energy firm. The email appeared to identify Biden as ‘Chair / Vice Chair depending on agreement with CEFC,’ in an apparent reference to now-bankrupt CEFC China Energy Co,” Fox News reported. “The email includes a note that ‘Hunter has some office expectations he will elaborate.’ A proposed equity split references ’20’ for ‘H’ and ’10 held by H for the big guy?’ with no further details. Fox News spoke to one of the people who was copied on the email, who confirmed its authenticity.”

Multiple sources reportedly told Fox News that “the big guy” was a reference to the former vice president.

Fox News host Tucker Carlson reported in a segment last night that emails appeared to show that the executive who allegedly met with Joe Biden had told Hunter Biden that he wanted help shutting down investigations into Burisma.

On Nov. 2, 2015, at 4:3o in the afternoon, a Burisma executive called Vadym Pozharskyi emailed Hunter Biden and his business partner, Devon Archer. The purpose of the email, Pozharskyi explains, is to “be on the same page re our final goals … including, but not limited to: a concrete course of actions.”

So what did Burisma want, exactly? Well, good PR, for starters. The executive wanted “high-ranking US [sic] officials” to express their “positive opinion” of Burisma, and then he wanted the administration to act on Burisma’s behalf.

“The scope of work should also include organization of a visit of a number of widely recognized and influential current and/or former US [sic] policy-makers to Ukraine in November, aiming to conduct meetings with and bring positive signal/message and support” to Burisma.

The goal, Pozharskyi explained, was to “close down for [sic] any cases/pursuits” against the head of Burisma in Ukraine.

So that couldn’t be clearer, what they wanted. Burisma wanted Hunter Biden’s father to get their company out of legal trouble with the Ukrainian government—that’s exactly what happened. One month later to the day, on Dec. 2, 2015, Hunter Biden received a notice from a Washington PR firm called Blue Star Strategies … apparently had been hired to lobby the administration on Ukraine. This show has exclusively obtained that email.

Reported Hunter Biden email: "Don't worry, unlike your grandfather, I won't make you give me half your salary."

"The question remains, how has Joe Biden lived in extravagance all these years on a government salary?" — Tucker Carlson pic.twitter.com/aFEWXRhewJ

More Than 100 Absentee Ballots Found in Kentucky Dumpster; Case Handed Over to The US Attorney’s Office