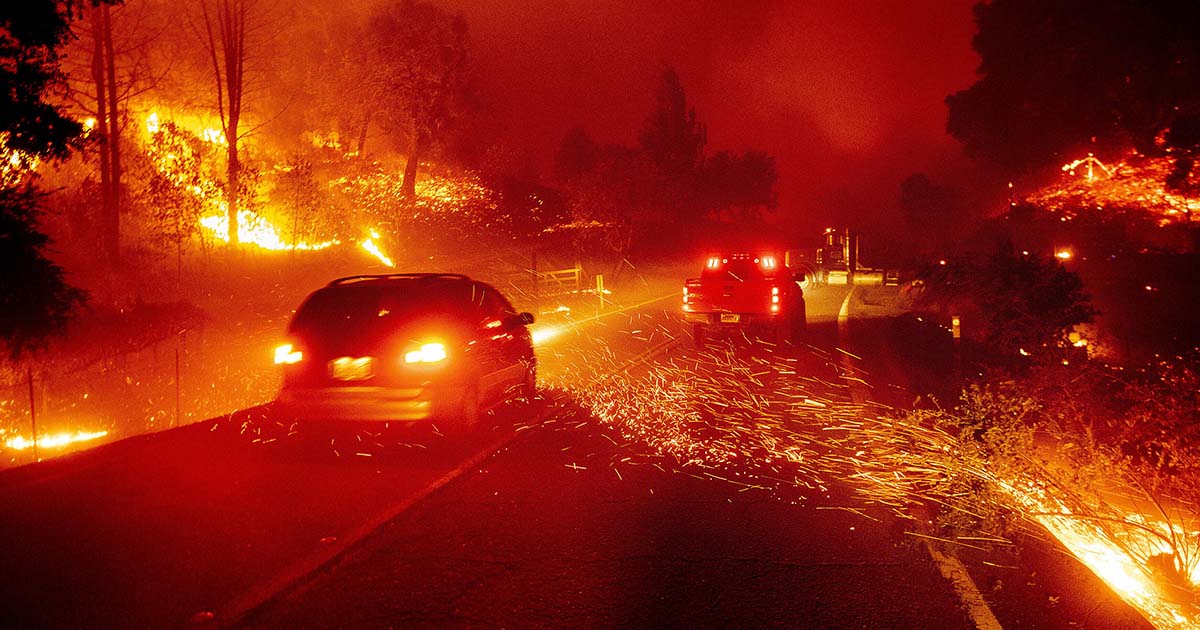 California has declared a state of emergency, the Associated Press reports, as wildfires and hurricane force winds ravage areas of the state, leaving millions without power.

Governor Gavin Newsom issued a statement Sunday in an attempt to reassure Californians — particularly those in the Bay Area and in Sonoma County where the fires threaten major agriculture and industry — that the state was deploying “every resource available” to battle the blazes.

The wildfires, blazing in Sonoma County and near San Francisco, and further south near Santa Clarita, had already driven more than 50,000 people from their homes by Saturday night when experts predicted a “catastrophic wind event” with hurricane-force gusts. By Sunday, 180,000 people had been told to flee to safer ground and winds up to 80 miles per hour blew across Napa Valley vineyards, causing the fires to take on an “erratic” burn pattern.

It’s the single largest evacuation in California in nearly three decades, according to Fox News.

“Hundreds of people arrived at the Sonoma County Fairgrounds in Santa Rosa by Sunday. Some came from senior care facilities. More than 300 people slept inside an auditorium filled with cots and wheeled beds. Scores of others stayed in a separate building with their pets,” AP reported.

Before the winds arrived, the Kincade Fire, which began Wednesday night, was only 10% contained, and had already burned 47 square miles, destroying nearly 80 structures, according to the Associated Press. Nine people have been reported injured so far, victims of a tree that came crashing down on a farmer’s market near San Francisco, but the casualties are by no means fully counted. The last fire, that swept through largely the same area in 2017, killed 24 people.

As if the wildfires weren’t bad enough, California electricity provider, PG&E, has initiated forced blackouts, cutting power to 2.3 million people statewide, “to avoid fires sparked by electric lines,” according to the LA Times. Many of those people could remain without power until at least Wednesday.

“PG&E said that as of noon Sunday it had shut down power to 940,000 customers, which are defined as an electrical meter that serves a residence or business,” the LA Times reported.

The blackouts are being done in seven phases, according to the California utility, and began at 5pm on Saturday night. They will roll through areas affected by the wildfires through the weekend and into Monday. So far, PG&E reports that five out of the seven areas targeted for blackouts are without power. The last two areas will lose power on Monday.

But even if the fires are contained before Wednesday, customers may still be without power, since PG&E says they must send out utility workers to inspect the affected electrical lines and determine them safe before they can turn the power back on.

PG&E says the blackouts are necessary in order to avoid massive blazes like the ones that raged through California in January and May of 2019, respectively, but Gov. Newsom has blamed PG&E for compounding the problem, and others pointed to signs that a faulty PG&E transmission line may have sparked a fire near Geyserville, California, that is still burning, suggesting that PG&E may be instituing the controlled blackouts out of concerns for their own system’s infrastructure.

On Sunday, as PG&E consumers called for the company to be taken over and electricity declared a public utility, Newsom reached out over the airwaves to Warren Buffett, begging the investor to purchase PG&E, per Business Insider. Such an acquisition is unlikely, however.

Outages are likely to continue until the fires are contained, a process that could take several days.

Trump Says He Kept Details of ISIS Operation from Pelosi to Avoid Leaks: ‘I Wanted to Make Sure This Was Kept Secret. I Don’t Want to Have Men Lost and Women’