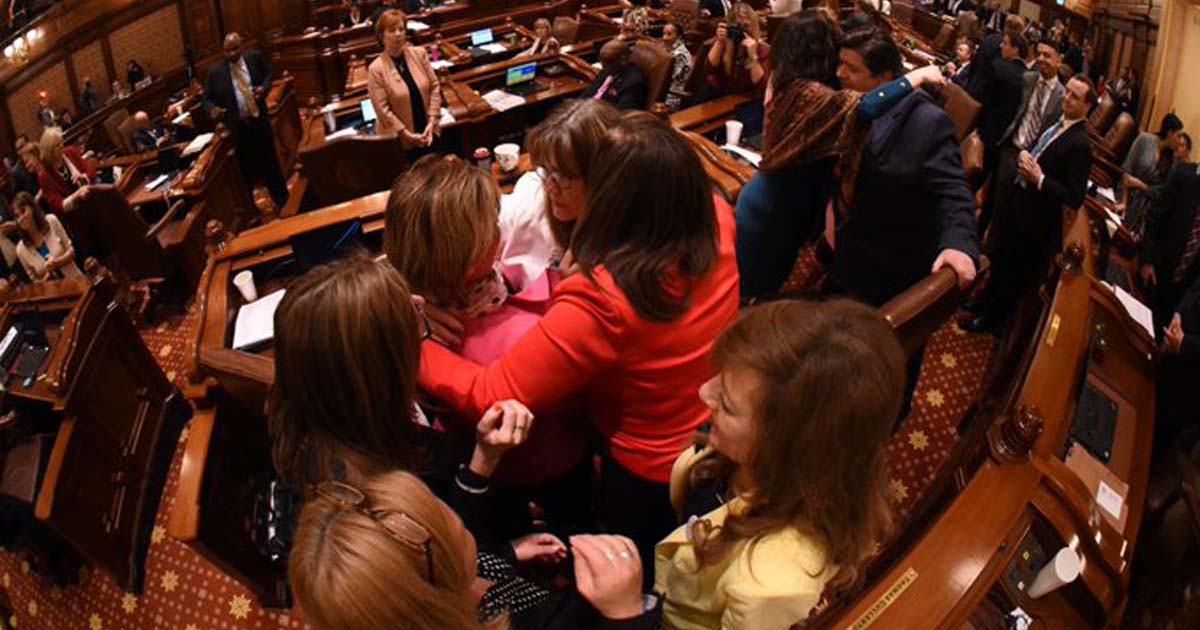 On Friday, the Illinois state Senate voted 34-20 to pass the “Reproductive Health Act.” The legislation already passed the state House, as we previously reported, and will now head to the desk of Governor J.B. Pritzker, who is expected to sign it into law.

The following are several pertinent portions of the “Reproductive Health Act” text:

This includes … the fundamental right of an individual who becomes pregnant to continue the pregnancy and give birth to a child, or to have an abortion, and to make autonomous decisions about how to exercise that right.

This act restricts the ability of the state to deny, interfere with, or discriminate against these fundamental rights…

A fertilized egg, embryo, or fetus does not have independent rights under the laws of the state…

Except as otherwise provided in this section, no individual or group policy of accident and health insurance that provides pregnancy related benefits may be issued, amended, delivered, or renewed in the State after the effective date of this amendatory Act of the 101st General Assembly unless the policy provides a covered person with coverage for abortion care.

In a 13-page document, the Thomas More Society condemns the legislation, and breaks down what each component means.

The legislation would eliminate the Abortion Performance Refusal Act, which states that “no physician, nurse or other person who refuses to recommend, perform or assist in the performance of an abortion … shall be liable to any person for damages allegedly arising from such refusal,” and provides financial penalties for those who would discriminate against individuals who refused to participate in an abortion procedure.

The Thomas More Society concludes by stating that the “Reproductive Health Act is an extreme bill that would basically enshrine abortion as a positive good in Illinois law.”

After the news broke that the Illinois state Senate passed the RHA, abortion advocates across the country cheered, and pro-life organizations sent out messages of condemnation.

The Illinois chapter of NARAL tweeted:

The IL legislature just passed the Reproductive Health Act! The RHA protects the right to safe & legal abortion, removes outdated restrictions & will ensure abortion is treated like any other form of healthcare. Now it goes to @GovPritzker to sign! #PassTheRHA

BREAKING: Illinois lawmakers just passed a law even more extreme than New York’s that includes repealing a ban on partial-birth abortion, where an infant is delivered feet first, her neck is punctured with surgical scissors and her brain is suctioned out. https://t.co/sOzU3pdPcF

Illinois is making history, because our state will now be the most progressive in the nation for reproductive health care. pic.twitter.com/W91r8WNp0g

In Illinois, we trust women to make the most personal and fundamental decisions of their lives – and now, that will be the law of the land, even as it’s under threat in other states.

This progress is only possible thanks to the fierce advocacy of leaders like @RepKellyCassidy, @SenatorBush and countless advocates and groups around the state, and I look forward to joining them to sign this bill.

As of publication, there’s no word on exactly when Governor Pritzker will sign the legislation into law.