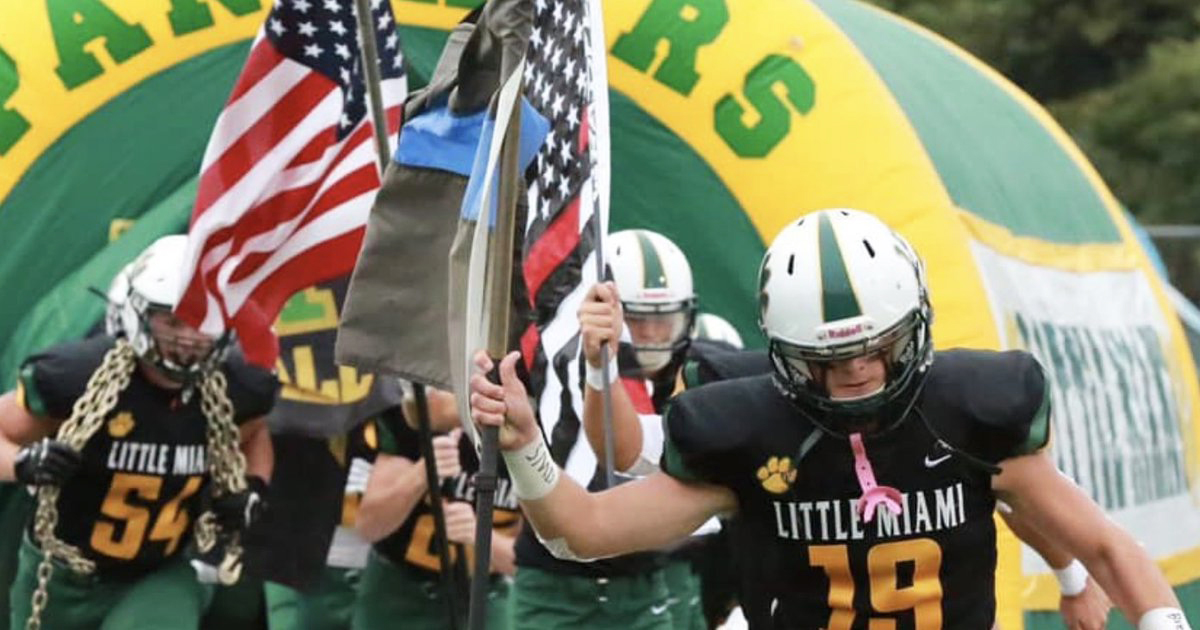 High School Warned Football Players Not To Fly Pro-Police Flag During 9/11 Game. They Did It, Now They’re Suspended From The Team.

A high school in Morrow, Ohio, has reportedly suspended two players from its football team after the players ignored a warning that they could not fly flags honoring first responders during the team’s game last week on the anniversary of 9/11.

“When the Little Miami High School football team took the field Friday, Sept. 11, a couple of players carried alongside the American flag a Thin Blue Line and Thin Red Line flags,” Local 12/WKRC-TV reported. “The problem is, the boys had asked the school permission prior to the game and they were denied and told if they defied the order, there would be consequences.”

The players — Brady Williams and Jared Bentley — flew the flags to honor firefighters and police officers on the 19th anniversary of the radical Islamic terrorist attack on September 11, 2001. The local news station said that Williams’ father is a police officer and Bentley’s father is a firefighter.

Two Little Miami football players pay the price for civil disobedience. They were told not to carry onto the field thin blue line and thin red line flags at their 9/11 game. They did anyway. The school has now suspended them from the team indefinitely. #ThinBlueLine #ThinRedLine pic.twitter.com/19y9GAvaxr

“I was all for it,” Bentley said. “Because my dad is a firefighter, and if it had been him killed on 9/11, I would have wanted someone to do it for him.”

“I don’t care what my consequences are,” Williams said. “As long as my message gets across, I’ll be happy.”

Superintendent Greg Power suggested that the boy’s decision to show respect for first responders by flying the flags represented a political point of view.

“We can’t have students who decide to do something anyway after they’ve been told that they shouldn’t be doing it,” Power said. “We did not want to place ourselves in a circumstance where another family might want a different flag to come out of the tunnel, one that may be [one that] many other families may not agree with from a political perspective.”

When Williams was asked by local media if the flags were meant to be a political statement, he responded: “No. Not at all. I was just doing it to honor the people that lost their lives 19 years ago.“

The Enquirer reported that a Facebook event called “We stand with Brady and Jared” has been organized for later this month and already more than 1,000 people have responded that they are going.

Little Miami Local Schools is saddened to see this story take such a negative turn. While we understand these students’ desire show their support of our first responders, they did not obtain permission from district officials. Administrators must act when students break the rules.

The Patriot Night program to memorialize the victims of 9/11 was already part of our pre-game ceremonies on Friday and the American flag is the first thing through the tunnel every Friday night. Little Miami enjoys an outstanding relationship with local first police and fire agencies and a Little Miami school resource officer is also a high school football coach.

Little Miami always has – and always will – support our first responders, our veterans, and all who sacrifice to maintain our freedoms.

NY Teacher Shares Cartoon With Students Comparing Police Officers to KKK. It Was Part of a Black Lives Matter-Themed Assignment.