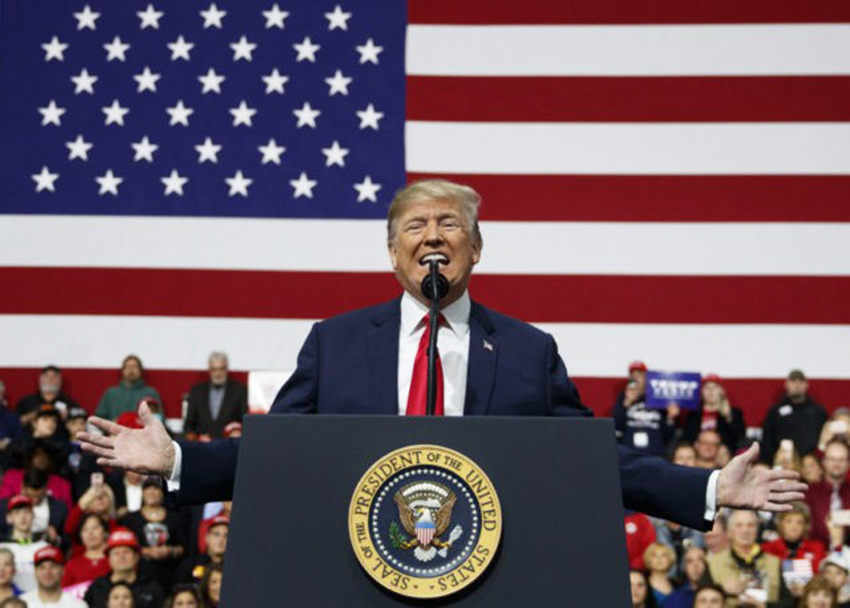 MOON TOWNSHIP, Pa. (AP) — President Donald Trump told Pennsylvania voters Saturday night that his new tariffs were saving the steel industry and urged them to send a Republican to the House so he can keep delivering those kinds of results.

The president lent his weight to Republican Rick Saccone in the final days of a surprisingly competitive special congressional election outside Pittsburgh.

“We need our Congressman Saccone” to “keep America great,” Trump said, framing the race as a national referendum ahead of the 2018 midterms, which will determine which party controls Capitol Hill.

“We can only do that if we elect people who are going to back our agenda,” Trump said, dismissing Democrat Conor Lamb’s efforts to distance himself from his national party and House Democratic leader Nancy Pelosi. “We need Republicans put in office,” Trump later added.

Polls suggest Lamb, 33, and Saccone, 60, are headed for a tight finish in Tuesday’s election in a district where Trump prevailed by nearly 20 percentage points in 2016.

Democrats need to flip 24 GOP-held seats to reclaim a House majority, and a victory in such a Republican-leaning district would boost their hopes and renew GOP concerns of a bad November.

Lamb, a Marine veteran and former prosecutor, has positioned himself as a moderate, touting his resume and declaring that he wouldn’t vote for Pelosi for party leader. He also avoids criticizing Trump.

The president warned voters on Saturday not to fall for it.

“The people of Pittsburgh cannot be conned by this guy Lamb,” Trump said. “He’s never going to vote for us. He can say, ‘I love President Trump.’ … I don’t want to meet him. I might like him.”

Trump conceded Lamb might not back Pelosi but said most Democrats will. And if Pelosi were in charge of the House, he said, Lamb would simply “vote the party line.”

The president also noted that Lamb and Saccone both have endorsed his new tariffs on steel and aluminum. But he said tariffs “are my baby” and that Democrats oppose them. Most Republicans do, as well. But the president said the policy is evidence of his defense of the working class.

“Not all of our friends on Wall Street love it, but we love it,” Trump said of the tariffs.

Trump’s appearance was part of a White House press to help Saccone in the closing days, adding to the $8 million plus that national Republican groups have already spent on his behalf. But the president was risking a second embarrassing defeat after backing Republican Roy Moore but watching the Alabama Senate hopeful lose in December.

The special election is to replace Republican Rep. Tim Murphy, who resigned last year amid revelations of an extramarital affair in which the anti-abortion lawmaker urged his mistress to get an abortion when he thought she was pregnant.

Murphy, an eight-term congressman, never had a close election and didn’t even have a Democratic challenger in his last two elections. But Saccone has struggled with his own fundraising and hasn’t run as aggressive a campaign as Lamb, prompting criticism from Republicans in Washington who quietly concede that Lamb is a stronger campaigner.

Trump gave a nod to those dynamics, noting talk of Lamb as a handsome candidate. But he said he thinks he’s better looking, and added that Saccone “is handsome,” too.

For his part, Saccone was thrilled to have the president’s help.

“The president’s support is key to attaining victory,” Saccone told rally attendees about 45 minutes before Trump took the stage. “There’s no one that I would rather have in my corner that President Trump. Are you with me on that?”

Bill Maher Pitches His Rewrite of the Second Amendment: The Right to ‘Apply for the Privilege’