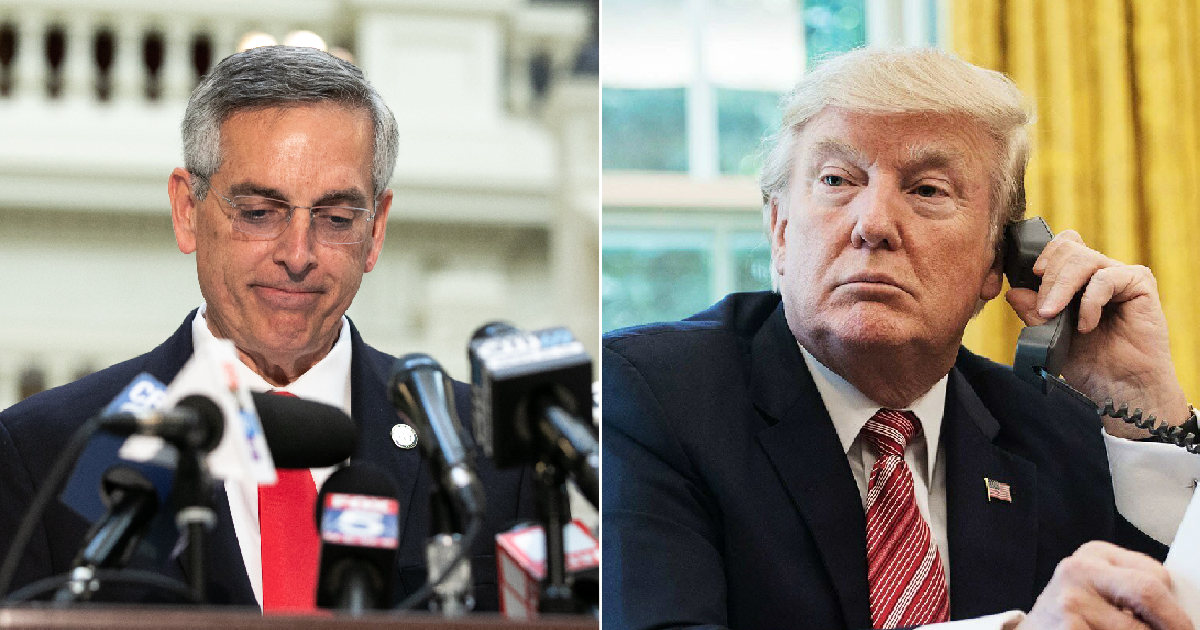 The Washington Post reported Sunday that they had obtained clips of a phone conversation between President Donald Trump and Georgia Secretary of State Brad Raffensperger.

The Post published just four minutes of what they say is an hour-long conversation between Trump and Georgia election officials.

So the Georgia Secretary of State (a Republican) secretly records @realdonaldtrump and then turns over the recording to the WaPost. The Post then leaks selected edits. Release the full, unedited audio.

Here is the audio from the call:

On the recording, Trump appears to insist that he won the state by an overwhelming majority, and asks Raffensperger to “recalculate” the vote count.

“I just want to find 11,780 votes,” Trump says, though from the conversation it appears he believes those votes were “stolen” in incidents of election fraud, not that he believes Raffensperger could manufacture the votes out of thin air.

“All I want to do is this: I just want to find 11,780 votes, which is one more than we have, because we won the state,” Trump states. “Flipping the state is a great testament to our country; it’s a testament that they can admit to a mistake. A lot of people think it wasn’t a mistake, it was much more criminal than that. But it’s a big problem in Georgia and it’s not a problem that’s going away.”

Trump goes on to say that there is “no way I lost Georgia. There’s no way. We won by hundreds of thousands of votes,” and that Raffensperger should “be careful of the political corruption” in places like Fulton County, where he claims ballots were “shredded” and where he suggests that voting machine manufacturer Dominion “is moving fast to get rid of their machinery.”

“Well, Mr. President, the challenge that you have is the data you have is wrong,” Raffensperger says. “We have to stand by our numbers; we believe our numbers are right.”

“So, tell me, Brad. What are we going to do? We won the election and it’s not fair to take it away from us like this. And it’s going to be very costly in many ways,” Trump concludes.

“The people of Georgia know that this was a scam, and because of what you’ve done to the president, a lot of people aren’t going out to vote [in the Tuesday runoff elections],” Trump elaborated. “A lot of Republicans are going to vote negative because they hate what you did to the president.”

“Everyone’s going to look very good if the truth comes out,” Trump added, finally. “And the real truth is I won by 400,000 votes at least. That’s the real truth.”

The president, clearly unsatisfied with the call, referenced it on Twitter Sunday morning, accusing Raffensperger of turning a blind eye to corruption.

“I spoke to Secretary of State Brad Raffensperger yesterday about Fulton County and voter fraud in Georgia. He was unwilling, or unable, to answer questions such as the ‘ballots under table’ scam, ballot destruction, out of state ‘voters’, dead voters, and more. He has no clue!” the president said on social media.

“The Governor, @BrianKempGA, and his puppet Lt. Governor, @GeoffDuncanGA, have done less than nothing,” Trump added.

[UPDATE: The full recording has been released by The Washington Post. You can check it out here.]