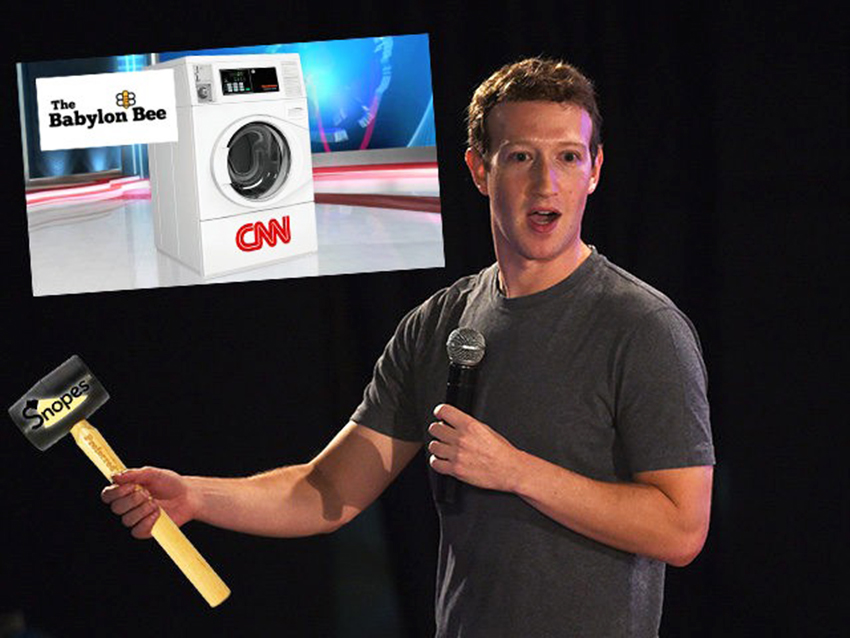 The Christian satire site Babylon Bee has been fact-checked by Snopes and threatened by Facebook after it published an Onion-style article about CNN about purchasing a washing machine to “spin the news.”

The Babylon Bee openly advertises itself as a satire site. Recent headlines include, “Local Pastor Hoping Curling Metaphors Go Over Big This Sunday,” “Nation That Calls Trump ‘Hitler’ Demands He Take All Guns Away,” “Calvinist Dog Corrects Owner: ‘No One Is A Good Boy’,” and “New Exercise Bike Forces You To Watch Christian Movies Until You Hit Your Calories Goal.”

Not only is this fairly anodyne stuff, but as you can see, the Babylon Bee is more than willing to satirize their own among the Faithful.

Naturally, none of this matters to our left-wing tech overlords, who are becoming increasingly desperate to censor free speech coming from conservatives, Christians, and the like.

This time, in order to protect the far-left CNN from ridicule, Snopes and Facebook worked in tandem to teach the Babylon Bee (and all of us) a lesson about mocking your betters.

It all started with a Babylon Bee headline that read, “CNN Purchases Industrial-Sized Washing Machine to Spin News Before Publication,” and a few paragraphs of satire that are more goofy than biting…

The custom-made device allows CNN reporters to load just the facts of a given issue, turn a dial to “spin cycle,” and within five minutes, receive a nearly unrecognizable version of the story that’s been spun to fit with the news station’s agenda.

One reporter was seen inserting the facts of a recent news story early Thursday morning.

Nevertheless, in a one-two punch, starting with an overbearing Snopes’ fact check that declared an obvious piece of satire “false,” according to the site’s founder Adam Ford, Facebook used that fact check as a means to lay the groundwork required to forever snuff out the Babylon Bee:

“A page you admin (The Babylon Bee) recently posted the link (CNN Purchases Industrial-Sized Washing Machine to Spin News Before Publication) that contains info disputed by (Snopes.com), an independent fact checker,” Facebook writes, before lowering the boom. “Repeat offenders will see their distribution reduced and their ability to monetize and advertised removed.”

Some Facebook users who commented on the “washing machine” post said that when they tried to share the satiric article to their own page, “On my feed, following this article, FB posted a ‘fact-checker’ link to Snopes.”

So, for the sin of tweaking CNN, not only is Facebook threatening the Babylon Bee with extinction, but those who share this satire are being flagged as spreaders of fake news.

When a powerful, mindless, faceless, left-wing bureaucracy wants to chill free speech, this is exactly how they go about it.

This is Kafka 101, a world where you do not know what the rules are because there are no rules — so you freeze and do nothing, which is exactly what the left wants. Never forget that this is exactly what Obama’s IRS did to the Tea Party in the lead up to the 2012 election.

Additionally, when one recalls how CNN threatened to dox a private citizen for making a silly YouTube video that targeted the last-place network, this act of corporate fascism against the Babylon Bee — and the chilling message it is meant to send to anyone who would dare mock the left-wing establishment — is even less surprising.