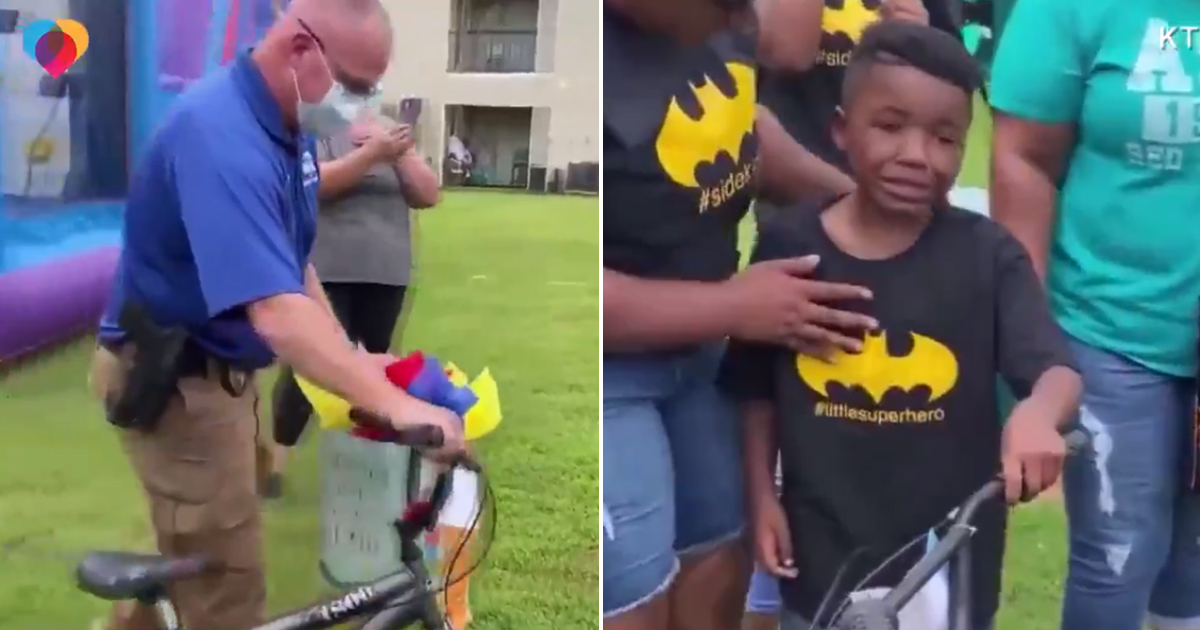 Suspect Steals Little Boy’s Bike Just Ahead of His Birthday. Local Police Step Up With a Party — and a Gift — He Will Never Forget.

A 7-year-old Arkansas boy was all smiles after his local police department banded together to gift him a brand-new bike for his recent birthday — along with a birthday parade.

The department made the heartwarming gesture after somebody stole the one he received as a Christmas gift.

Members of the Conway Police Department showed up at Bryan Jeffery’s home on Saturday with a brand-new bike.

According to the Log Cabin Democrat, Bryan cried tears of joy at the surprise.

“I wasn’t expecting this,” he said. “I was very surprised.”

The gift is especially meaningful for the 7-year-old, after somebody stole the child’s bike earlier in July when they were inside a local store.

The Jeffery family filed a police report on the stolen bike, but the little boy was crushed, as it had gone missing just days before his birthday.

Although the theft suspect returned the boy’s bike to the place from where it was taken, Detective Tim Gray — who was assigned to the case of the missing bike — worked with the local community to give Bryan a surprise he’d never forget.

“It really wasn’t on me,” Gray said on Saturday afternoon ahead of Bryan’s parade. “That’s awful for a 6-year-old to lose his bicycle right before his birthday.”

“It was a whole lot of people coming together for Bryan,” he recalled. “I’m not going to say right a wrong, but to correct a wrong the best that we can,” Gray said. “It’s just good that the whole community of central Arkansas came together for this.”

A bike, a birthday party, a bounce house, and a Batman cake

The bike and the parade weren’t even the only things in store for Bryan — the department and Bryan’s family worked together to plan a surprise party with a bounce house and a donated Batman cake.

Gray said he worked with members of the community to replace the bike, and was also able to obtain a helmet and a bicycle lock for Bryan’s new bike.

Carmen Jeffery, Bryan’s mother, was moved by the outpouring of love and support.

Several members of the department were in attendance for the child’s special day.

“When he was in pre-K, they asked him what he wanted to be when he grew up,” Carmen told the outlet. “He dressed up as a police officer, and he still wants to either be a police officer or a firefighter. He just wants to help people.”

The case of the missing bike may have started with heartache and sadness, but it ended on a high note for all involved.

BEST BIRTHDAY: This seven-year-old boy was brought to tears when he received the best birthday surprise thanks to his local police department. pic.twitter.com/joRWhn4lOj