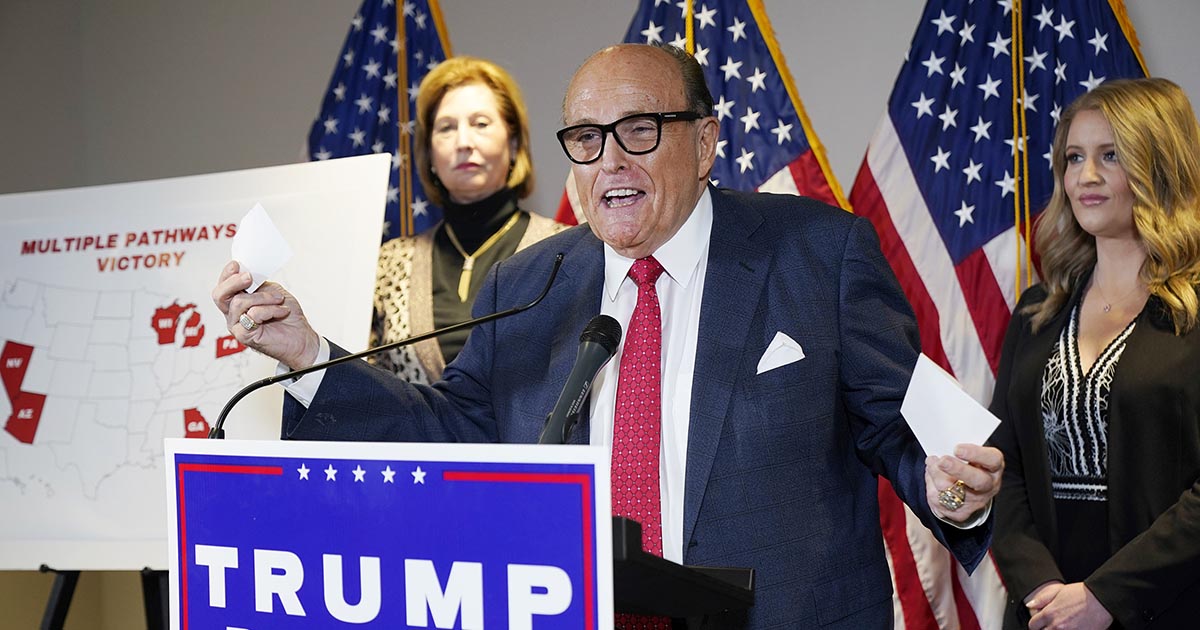 Members of President Donald Trump’s legal team claimed to the American public at a press conference held Thursday that Trump won the election “in a landslide,” if it had not been for alleged fraudulent votes and other shady dealings. They also promised they would “prove it.”

Former New York City Mayor and lawyer to the president, Rudy Giuliani, said that in states including Georgia, Pennsylvania, Michigan, Wisconsin, Nevada, and Arizona, the legal team has found “more than double the number of votes needed to overturn the election, in terms of provable, illegal ballots.”

Mr. Giuliani cited general “lawsuits” and “affidavits” to support his claim, adding that he hopes to make more affidavits public.

He also claimed there was voter fraud in “big cities” controlled by Democrats. “The number of voter fraud cases in Philadelphia could fill a library,” Giuliani said.

The recount in Georgia, he said, will tell the American people “nothing” since signatures are not being inspected. And in PA, Giuliani alleged, 682,770 ballots “were put in, cast, and weren’t inspected,” which he said should be void. There were “two different standards” in parts of the state of PA when it came to counting ballots, referencing so-called “cured” ballots, the lawyer added.

Rudy Giuliani says they have "more than double" the number of votes needed to overturn the election in terms of "provable, illegal ballots." pic.twitter.com/BKOno1PZfm

“This is stunning, heartbreaking, infuriating and the most unpatriotic act I can even imagine for people in this country to have participated in in any way, shape, or form,” Powell said. “And I want the American public to know right now that we will not be intimidated.”

Trump campaign attorney Sidney Powell says "President Trump won by a landslide. We are going to prove it." pic.twitter.com/AYTe1usmsk

Attorney Jenna Ellis emphasized that this press conference would act as the legal team’s “opening statement,” stating that hard evidence will be presented in court.

She also lambasted the press, referring to the mainstream media as the “court of public opinion” and bashing them as biased. “I would strike 99%” of the journalists if they were her jury,” she said, and “I would be allowed to because of the fake news coverage you provide.”

Trump campaign senior legal adviser @JennaEllisEsq says she would "strike 99%" of journalists from the jury and "I would be allowed to because of the fake news coverage you provide." pic.twitter.com/Wb9j20iBi7

As The Wall Street Journal reported Thursday, Trump’s legal team has filed lawsuits in multiple states and are working to halt some election result certifications. Some of their lawsuits have been dismissed, others withdrawn, while others pending:

Mr. Trump’s legal campaign — which is now led by the president’s personal attorney Rudy Giuliani — is still pursuing court challenges in Pennsylvania, Georgia and Nevada, in some cases asking that results from entire counties or states be thrown out. On Wednesday the campaign transferred $3 million to Wisconsin for a partial recount. On Thursday, the campaign withdrew its lawsuit in Michigan.

Georgia is expected to release the results of its recount at noon on Thursday. Mr. Biden leads Mr. Trump in the state by more than 12,700 votes in the latest count. Michigan must certify the results by Monday, as must Pennsylvania, where Mr. Giuliani appeared in court earlier this week to ask a judge to block certification of the vote count. Nevada must certify results by Tuesday.

“No evidence has emerged of widespread fraud, and several of Mr. Trump’s lawyers have told judges across the country that they don’t believe such fraud occurred,” the Journal said.

WATCH the full press conference, below:

Charlie Brown Thanksgiving, Christmas Specials are Coming Back to Traditional TV Following Outcry Over Their Removal