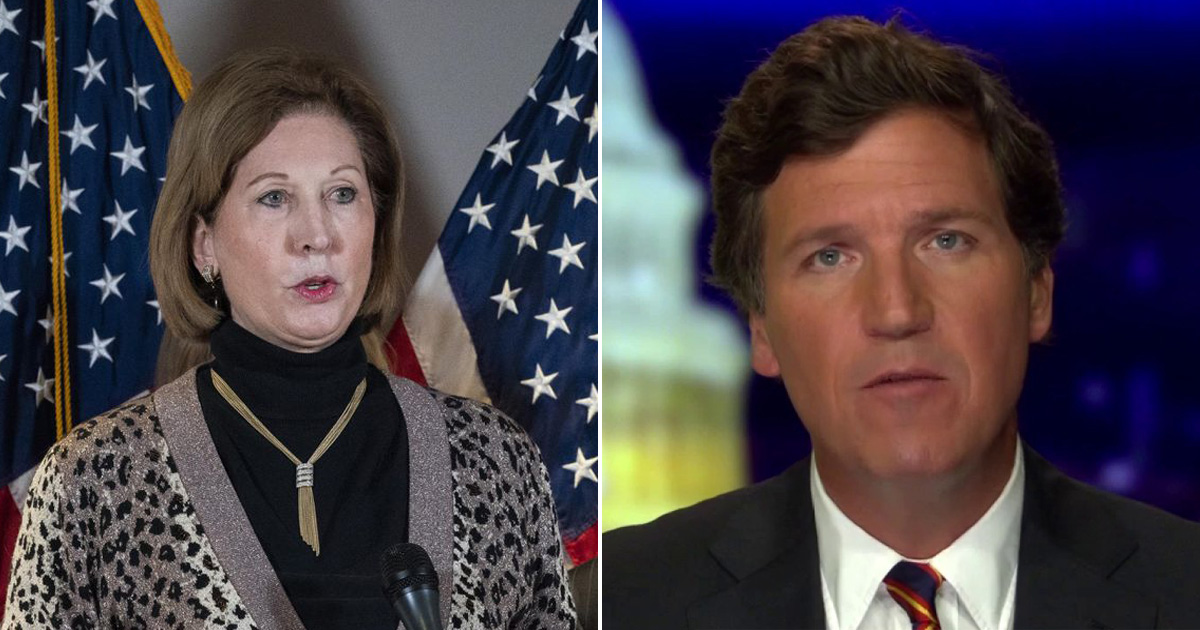 Trump lawyer Sidney Powell responded to Fox News host Tucker Carlson’s segment about her unproven claims regarding voting systems that were used in this month’s elections by saying that Carlson needed to conduct his own investigation.

Powell’s comments came in response to a segment that Carlson aired earlier in the evening during which he highlighted the Trump campaign’s allegations of voter fraud and urged Powell to come on his show so she could provide evidence to back up the allegations. Carlson said that his show repeatedly asked Powell to come on, and that she became angry when she was asked to provide evidence and told the program to stop contacting her.

“Apparently Mr. Carlson missed the news conference today,” Powell said, despite Carlson airing a portion of her comments during his show. “I would continue to encourage him and all journalists to review all the materials we have provided so far and conduct their own investigations.” “Evidence continues to pour in, but a 5 minute television hit is not my focus now,” Powell continued. “Collecting evidence and preparing the case are my top priorities.”

Carlson said that he offered her the entire hour-long show to air her case and present her evidence to the American people.

Video and transcript below:

All of which brings us to the bombshell at the center of today’s press conference — that was delivered by former prosecutor Sidney Powell, who has also served as general Mike Flynn’s lawyer. For more than a week, Powell has been all over conservative media with the following story: this election was stolen by a collection of international leftists who manipulated vote tabulating software in order to flip millions of votes from Donald Trump to Joe Biden.

The other day on television, Powell said of Trump, that when the fraud is finally uncovered, ‘I think we’ll find he had at least 80 million votes.’ In other words, rigged software stole about 7 million votes in this election.

One of its most characteristic features is its ability to flip votes. It can set and run an algorithm that probably ran all over the country to take a certain percentage of votes from President Trump and flip them to President Biden, which we might never have uncovered had the votes for President Trump not been so overwhelming in so many of these states that it broke the algorithm that had been plugged into the system, and that’s what caused them to have to shut down in the states they shut down in.

That was a few hours ago, but Sidney Powell has been saying similar things for days. On Sunday night, we texted her after watching one of her segments. What Powell was describing would amount to the single greatest crime in American history. Millions of votes stolen in a day. Democracy destroyed. The end of our centuries-old system of self-government — not a small thing. To be perfectly clear, we did not dismiss any of it. We don’t dismiss anything anymore, particularly when it’s related to technology. We’ve talked to too many Silicon Valley whistleblowers; we’ve seen too much. After four years, this may be the single most open-minded show on television. We literally do UFO segments, not because we are crazy or even interested in the subject, but because there is evidence that UFOs are real and everyone lies about it.

There is evidence a lot of things responsible people used to dismiss out of hand as ridiculous are in fact real, and we don’t care who mocks it. The louder the Yale political science department and the staff of The Atlantic magazine scream ‘conspiracy theory,’ the more interested we tend to be. It’s usually a sign you’re over the target.

A lot of people with impressive sounding credentials in this country are frauds; they have no idea what they’re doing. They’re children posing as authorities, and when they’re caught, they lie and then they blame you for it. We see that every day; it’s the central theme of this show and will continue to be. So, that’s the long way of saying we took Sidney Powell seriously; we have no intention of fighting with her, we’ve always respected her work — we simply wanted to see the details. How could you not want to see them? So we invited Sidney Powell on this show. We would’ve given her the whole hour; we would’ve given her the entire week actually and listened quietly the whole time at rapt attention — that’s a big story. But she never sent us any evidence despite a lot of requests, polite requests, not a page. When we kept pressing, she got angry and told us to stop contacting her. When we checked with others around the Trump campaign, people in positions of authority, they told us Powell has never given them any evidence either, nor did she provided any today at the press conference. Powell did say electronic voting is dangerous, and she’s right — we’re with her there — but she never demonstrated that a single actual vote was moved illegitimately by software from one candidate to another, not one.

So why are we telling you this? We’re telling you this because it’s true. In the end, that’s all that matters, the truth. It’s our only hope; it’s our best defense. And it’s how we’re different from them. We care what’s true and we know you care, too. That’s why we told you. Maybe Sidney Powell will come forward soon with details on exactly how this happened and precisely who did it — maybe she will. We are certainly hopeful that she will. What happened with the vote-counting this month and at the polling places in Detroit and the polling places in Philadelphia and so much else actually matters. It matters no matter who you voted for, it matters whether or not you think this election is over. Until will know the answers to those questions conclusively and we can agree on them, this country will not be healed.