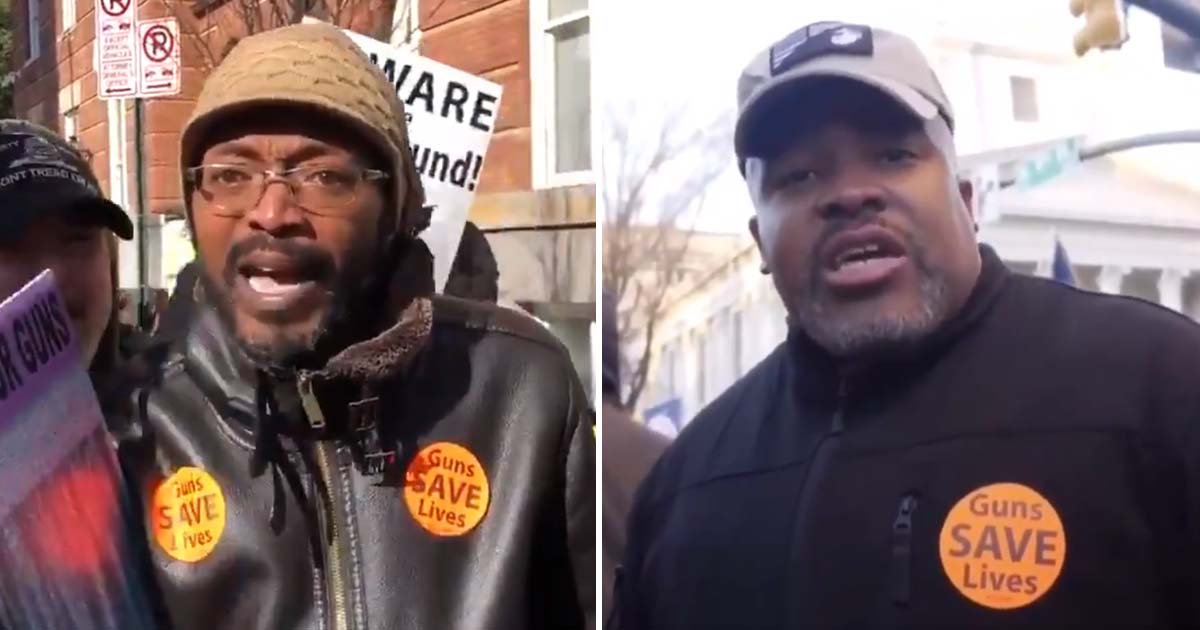 On Monday, tens of thousands of Second Amendment supporters of all stripes attended a rally outside the Virginia state capitol to protest controversial gun control measures pushed through by Democrats and supported by scandal-ridden Governor Ralph Northam (D-VA).

Despite the media pushing the narrative that the rally was going to be attended by dangerous right-wing extremists and violent white supremacists, the rally was diverse and peaceful.

Minorities participating in the event smacked the media for pushing the false narratives.

A black man at the rally was facetiously asked if he was a “white supremacist,” as a way to dog the media.

The Second Amendment supporter was holding an old image of Governor Northam in either blackface or a KKK hood, captioned, “The man behind the sheets wants your guns.”

“United we stand. That’s what it’s about,” he added, “white, black, Hispanic, Latino, whatever.”

“Sir, are you a White Supremacist?” pic.twitter.com/JFhxLRfgv1

Another man who said he works at a gun store part-time said he came out to the rally because he does not support Democrats’ gun control measures and was fed up with the media’s racially-charged coverage of the event.

An attendee at the rally in Richmond Virginia dispels the media smears against rally-goers.

He says the media is mischaracterizing them, & that they are just law abiding citizens who want to advocate for their constitutional rights.#VirginiaRally
pic.twitter.com/Vp3bJX8eNi

Another man from Virginia named Mark said he came to the event because he “loves this country” and wanted to support the Second Amendment, which he said was both a constitutional and civil rights issue.

“The governor, who’s known for blackface and/or possibly having a Klan hood on, has the audacity on MLK Day to declare an executive order to prevent people from lawfully protesting,” he continued.

Northam also wanted to push the narrative that “white supremacists are stirring up issues,” he noted. “I feel comfortable here, haven’t had any issues here. I don’t know what the problem is.”

Interview with one of today’s rally attendees. pic.twitter.com/l21jySGOAs

Three gun control bills passed the Democrat-controlled Virginia Senate last week, sparking the protests on Monday. “The three bills that made it through include a law that will allow local authorities to ban weapons from public spaces during some events, another that limits handgun purchases to one a month, and a law requiring background checks for all firearm purchases,” The Daily Wire reported Monday.

The rally was completely peaceful with zero arrests despite the media’s forecast. For example, those in attendance touted pro-civil rights signs, chanted “USA” together, sang the national anthem, recited the pledge of allegiance in unison, and even picked up trash.

Below is a video montage of the news media fearmongering over the rally, compiled by NewsBusters managing editor Curtis Houck:

#NEW MONTAGE from me showing how @CNN and @MSNBC spent their mornings hyping fears that "white nationalists" and "extremists" would cause "violence" at #VirginiaRally for the #2A like in 2017 at Charlottesville #LobbyDay2020 pic.twitter.com/wR91mMPfmR

Carl January 21, 2020
| | |
No violence, it was a peaceful protest by honest law abiding American gun owners expressing their constitutional rights. Ralph Northam is a jerk, why do people vote for idiots .
0 0
0
Reply

Matt January 21, 2020
| | |
Northam apparently doesn't like living in a country where gun ownership is a legally enshrined right and duty. He doesn't HAVE to continue living in America, does he?
0 0
0
Reply

Paul January 21, 2020
| | |
It's a crying shame. The easiest way to tell who protested yesterday is look how much trash they left. And the Left is always the ones who leave it!
0 0
0
Reply