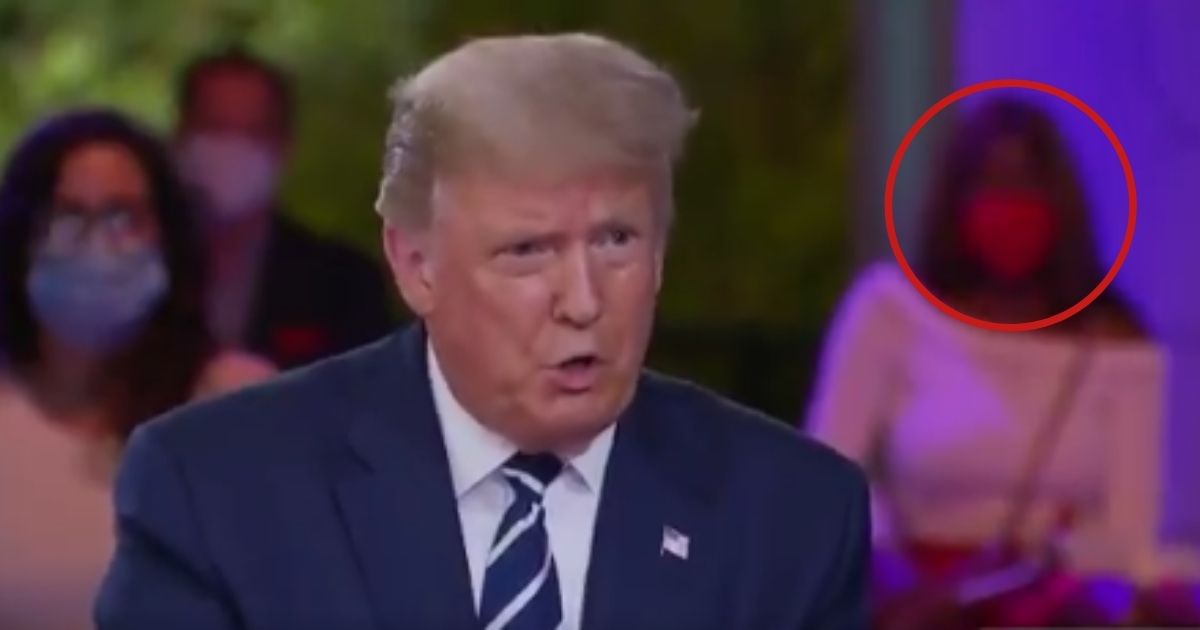 Liberal Twitter has spoken, and it wants the head of the #RedMaskLady.

Who is #RedMaskLady, you may ask? That’s the nickname that’s being given to a woman who sat behind President Donald Trump during his Thursday town hall on NBC and fervently agreed with what he was saying, nodding along as he made many of his points.

Here’s the woman giving her assent to Trump’s case for a second term:

It's excellent to have a black woman nodding in agreement and showing support for Trump as he gets attacked by a hostile leftist pic.twitter.com/2XVzbn1v6a

“We have the strongest economy in the world. We closed it up,” the president said.

“We’ve given you the greatest tax cut in the history of our country. Greatest regulation cut, equally as important. And we created new levels of jobs that nobody thought was possible. And next year is going to be better than ever before.”

The moderator for the event was Savannah Guthrie, who — surprise of surprises — wasn’t necessarily a fount of warmth toward the president. Not that a moderator of a town hall ought to be, mind you. The atmosphere in Biden’s town halls, however, is such that you wouldn’t be surprised if the moderator got up and hugged Joe halfway through the event.

#RedMaskLady probably wasn’t the hug-Joe type — as seen in this clip where she nodded along while Trump noted he’s been denouncing white supremacy for years.

👀 Voter behind President Trump (on the right) nods along as he reminds Guthrie that he has been denouncing white supremacy for years.

This came during a contentious part of the town hall where Guthrie intimated Trump wouldn’t denounce white supremacy.

“I’ve denounced white supremacy — for years — but you always do it,” Trump said, referring to the assumption he hadn’t done so.

“You always start off with the question. You didn’t ask Joe Biden, whether or not he denounces antifa. I watched him on the same basic show with Lester Holt, and he was asking questions like Biden was a child,” Trump continued.

“Well, so this is a little bit of a dodge,” Guthrie responded.

“So, are you ready? Are you … Wait. Are you listening? I denounce white supremacy,” Trump responded.

But, no, we continued on this: “Do you feel, it feels sometimes you’re hesitant to do so, like you wait a beat,” Guthrie said.

So, again, we have a star on conservative Twitter. Pundits Dan Bongino and Steven Crowder were among those celebrating her:

She has an open invite to come on my show anytime. https://t.co/6ShF4AuqFr

The black woman nodding in agreement with President Trump is everything right now… pic.twitter.com/OLp0jHCDG5

Whoever this woman is nodding her head – we stand with her! pic.twitter.com/By1TJf0uy8

Eric B October 18, 2020
| | |
Mayra Joli is her name. Joli is from Santo Domingo in the Dominican Republican and resides in Coral Gables, according to her Facebook page. She is a partner at the Joli Law Firm located in Miami.
0 0
0
Reply

JACK W DERE October 17, 2020
| | |
Thumbs up to the Black lady who sat behind the President during the town hall meeting. I was watching her nodding in agreement and gave thumbs up on every point the President made. The left must be flipping in their grave now. You go Lady!!!
0 0
0
Reply

D Lange October 17, 2020
| | |
I'm guessing the 'RedMaskedLady' isn't real popular with the Dems right now. Too bad! This woman made more sense without saying a word and just nodding than Guthrie did talking the whole time! Guthrie needs a BIG lesson on how to show respect. She wasn't just talking to her neighbor over her backyard fence. She was constantly interrupting the President of the United States!!! Did she really think we wanted to hear what SHE had to say over Trump? How arrogant!! Guthrie should have worn a mask that was Superglued to her lips!
0 0
0
Reply

Gerald D Cline Jr October 17, 2020
| | |
The left does not just hate Donald Trump. They hate everyone who supports him or voted for him. If they had their way they would round us all up and hold an old fashioned Communist purge (kill every one of us). If Biden wins, they might.
0 0
0
Reply